Large Vans May Easily Spin Out of Control or Roll, Injuring Occupants. Learn How You Can File for Compensation After an Accident.

In 2008, the United States Department of Transportation (DOT) released a study indicating 15-passenger vans are much more likely to roll when they have more than 10 occupants. A large passenger load shifts the center of gravity toward the rear of the vehicle, affecting its handling. When trying to avoid an accident, a driver may put the vehicle into an oversteer or fishtail, either of which can lead to a rollover.

Rollover accidents are problematic no matter the cause or vehicles involved. What is especially worrisome here is that 15-passenger vans are supposedly built for high occupancy. However, when used as intended, they are dangerous!

Passenger vehicles should be designed so they are safe in all expected use cases. Many organizations including churches, schools, and other groups rely on these vehicles for cost-effective group transportation. Automakers have negligently failed to add safety and stability features to make these vehicles safe when numerous passengers are onboard. If you’ve suffered injuries in a 15-passenger van accident, talk to our auto defect lawyers at The Gilbert Law Group® for assistance.

Call our team of skilled litigators at (888) 711-5947 if you think you have a 15-passenger van accident claim. We serve clients across the country. 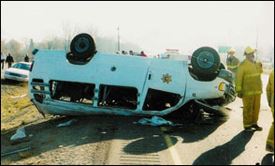 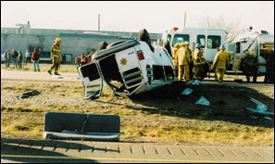 A 15-passenger van accident in which instability and the use of tempered glass combined to cause the paralysis of our client.

The dangers of 15-passenger vans have been well documented and acknowledged by both manufacturers and government agencies alike, with the National Highway Traffic Safety Administration (NHTSA) admitting that in the hands of inexperienced drivers, the vehicles can be challenging to maneuver and need more space than other passenger cars. Given their high center of gravity and propensity to roll, drivers of 15-passenger vans must be especially cautious and avoid quick maneuvers. Sometimes, the accidents we see do not even include another vehicle; merely a sudden stop or a quick turn can cause these vans to roll.

Forty mph testing done on a fully loaded van shows that the vehicle will roll during a common testing maneuver called a J-turn.

Some of the dangers of 15-passenger vans include:

According to a recent NHTSA study, 509 occupants of 15-passenger vans were killed in crashes between 2007 and 2016.

The NHTSA recommends drivers of 15-passenger vans have commercial licenses, but even experience operating large vehicles may not be enough to prevent an accident when the danger is inherent to the design. Automakers must do their part to make these vans safe to drive.

Our team can assess your accident and inform you whether a vehicle defect may have played a role and what your legal rights and options are. With an in-house engineering team that has extensive experience discovering and identifying crucial evidence of auto manufacturing negligence, we are well-positioned to help you file an injury claim. We have successfully litigated against many auto giants, including Toyota, GM, Ford, and many other companies.

Our attorneys have the experience, skill, and resources to help you file a case if you or a loved one were seriously injured in a 15-passenger van accident. We will provide an honest evaluation and help you understand what you can expect if you decide to move forward with a claim. From our Denver office, we are proud to represent accident victims across America.