Conversion vans are passenger vans made by major automobile manufacturers then modified or completed by a van conversion company. Typically, these vehicles are equipped with trim upgrades such as captain’s chairs, paneling, raised roofs, sofa chairs, television sets, fold-out beds, and even kitchenettes and bathrooms. 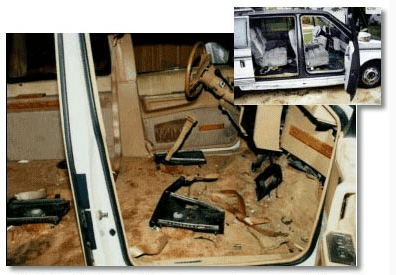 The plush interiors found in many conversion vans can lull consumers into a false sense of security regarding their vehicles. The comfortable surroundings make passengers feel safe though they may actually be at a high risk of injury. Captain’s chairs, for example, have been known to completely break off the vehicle floor in a collision, allowing their occupants to collide with the vehicle interior at lethal speeds.

You Have Rights Under Federal Motor Vehicle Safety Standards

Unfortunately for the consumer, the conversion van industry has frequently sacrificed safety in favor of sales. Many conversion outfits do not manufacture safe parts and are surprisingly unaware of their safety obligations under the Federal Motor Vehicle Safety Standards.

The Gilbert Law Group, P.C.® is one of the nation's leading trial law firms for auto defect cases, recovering over $1 billion for clients since 1969. We are lead by Attorney Jim Gilbert who is a member of the prestigious Inner Circle of Advocates, a selective group of the top 100 trial lawyers in the U.S. If your conversion van failed during an accident and caused serious injuries, we may be able to file a claim.

Call (888) 711-5947 for a free case evaluation, no matter where you are in the U.S. We will give you a complete and honest opinion regarding your legal options.

Why are Conversion Vans So Dangerous?

Safety and quality control are often overlooked in the conversion process. Auto manufacturers select converters based upon their ability to move merchandise, not their safety record. The Big Three (General Motors, Fiat Chrysler, and Ford Motor Company) typically do not review the designs, testing, or manufacturing processes of their authorized converters, meaning the approval process does nothing to protect consumer safety. Likewise, when a non-approved converter buys vans on its own and does not deal directly with the auto manufacturer, there is no scrutiny of the conversion work.

The result is consumers trusting big dealerships and buying major-label vehicles that have not undergone the rigorous safety testing non-converted vehicles do. In fact, important safety systems may not receive any engineering focus during the conversion. Consumers are not warned of these oversights and may only learn of the risks when it is too late.

In this head-on collision between a converted Dodge Caravan and a Pontiac 6000, the Caravan’s captain’s chairs and seatbelts broke, allowing the driver to strike the steering wheel with enough force to cause severe brain damage and quadriplegia. The seat and seatbelts in the Pontiac did not break, and its driver (pictured on the ground) suffered only a broken leg and other non-permanent injuries.

According to the results of government testing, a stock Dodge Caravan with factory seating and restraints would have fared much better in the same accident. Had the Caravan driver been driving a normal (non-converted) minivan, he most likely would have walked away with only minor injuries.

History of the Van Conversion Industry

In the 1980s, Americans began buying smaller and more fuel-efficient recreational vehicles (RVs) in the form of converted vans. To meet the increase in demand, thousands of new converters jumped into the market, buying vans, sprucing them up in simple garages and warehouses, and reselling them at a hefty profit.

During this era, the “Big Three” American automakers (General Motors, Fiat Chrysler, and Ford Motor Company) established van conversion programs to help sell more vehicles. Typical arrangements consist of contracts between auto manufacturers and approved converters that agree to receive a minimum number of vehicles per year. The automaker ships incomplete vehicles, usually without seats or interior trim, to the converter. After adding seating systems, trim, and other upgrades, the converter then markets the vans to dealerships.

The Dangers of Driving a Conversion Van

When conversion companies add trim upgrades and other luxuries to a conversion van, they often take something else away: the basic vehicle safety features we have come to take for granted. Here are some of the features of conversion vans that introduce more risk for their drivers and passengers.

Seats That Bend or Break Free During Accidents.

When vans leave the manufacturer for a converter, they typically do not contain seats or interior trim. It is up to the converter to install seating and restraint systems that comply with federal motor vehicle safety standards. Many converters, however, have little experience designing and testing automobile seats. Our team recently fought a seat failure case that involved as a defendant an office chair manufacturer that got into the automotive seating business by tearing down other car seats and imitating the design—without the help of engineers.

The two front seats in this conversion van failed completely in a collision similar to a 35-mph frontal barrier test the government would run. The seat pedestals bent significantly forward and upward, and the seat tracks on the pedestal released. The driver and passenger were seriously injured. 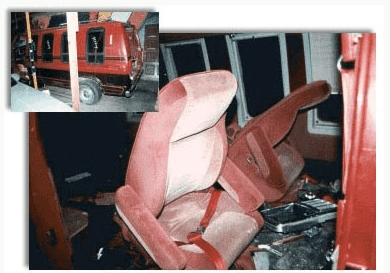 When this conversion van was involved in a moderate frontal collision, the middle row of captain’s chairs deformed forward, allowing their belted occupants to strike the front seats. One occupant was killed and the other suffered a brain injury. (Photo courtesy of Robert M.N. Palmer, P.C.)

When seating systems fail, seatbelts are often quick to follow. Restraints are not typically designed to withstand the dynamic weight of the occupant on their own. Seatbelts can also become severed when they contact portions of a deformed seat or other sharp, protruding objects. 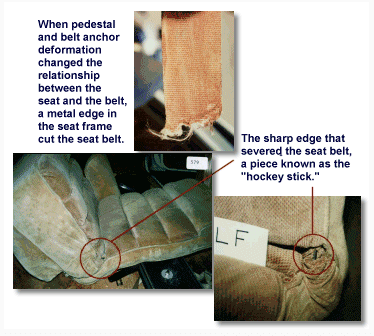 Roofs That Do Little More Than Keep Out the Rain

Conversion companies frequently cut off the factory steel roof and support structures of the stock van and install a raised roof, usually constructed of fiberglass and attached with simple sheet-metal screws. 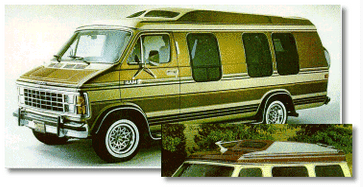 These roofs may look nice and provide headroom, but they are not as strong as a steel factory roof that is welded to the vehicle. During rollovers, these roofs can shatter or disconnect from the van, creating a huge opening through which occupants can be ejected. 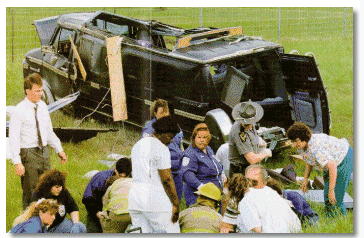 When a conversion van with a raised fiberglass roof is involved in a rollover, the screws attaching the roof to the van may pop out or be sheared off, allowing the roof to completely separate from the van. In these circumstances, ejection of unbelted occupants is all but assured. (Photo courtesy of Ricci, Hubbard, Leopold & Frankel)

The luxurious finish of a conversion van combined with marketing brochures showing travelers lounging unrestrained in their tall interiors can leave consumers feeling as safe in their conversion vans as they are in their living rooms. This may explain why a large percentage of conversion van occupants do not wear their seatbelts. These people are completely unprotected when other safety features fail (or have been removed entirely).

Converters often enlarge some of the vehicle’s windows, sometimes making them reach all the way down to the van floor. These side and rear windows often shatter during collisions, creating large openings through which occupants can be ejected. It is possible to make these windows out of the same safety glass used in windshields (which typically fractures but remains in place and does not break out during accidents), but this costs more and is typically not done. 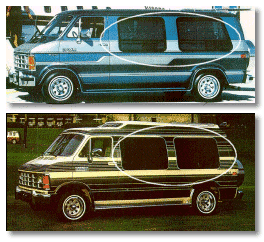 The Role of the Government in Conversion Van Safety

The government has studied conversion vans several times and made multiple recommendations to the industry. A 1979 study warned of dangers including insufficiently fastened seats, cabinets, and appliances that could break loose in an accident. In 1991, the National Highway Traffic Safety Administration (NHTSA) worked with an industry association to inform converters about tests in which some pedestal seats “bent all the way forward so as to possibly endanger the occupants when coming into contact with rigid parts of the vehicle.” The industry association also suggested that converters consider voluntary recalls.

While some converters heeded NHTSA’s advice for their future conversion van models, most did not consider recalling prior defective car models, many of which are still on the road.

The Future of Van Conversion

While the conversion industry has consolidated in the past decade, quality control remains variable. Even today, these companies continue to produce vans that are not crashworthy and likely violate federal safety standards. For instance, features that are known to be dangerous, like raised fiberglass roofs, are still in widespread use. Additionally, many older models with known defects are still on the road.

We hope the NHTSA will continue to pressure passenger van converters to put safety first and the industry will evolve to favor consumers over big profits. However, we are not simply sitting around waiting for change. Our team is here to file lawsuits against these companies on behalf of those injured by their dangerous vehicles. Making them face the monetary consequences of their negligence is often the most effective way to inspire change.

Talk to our conversion van accident attorneys at (888) 711-5947 for a free consultation. We serve clients across America.

Our litigators have decades of combined experience and, along with our in-house engineering team, can effectively argue for you after an injury caused by a defective conversion van. The injuries caused by serious safety oversights in these vehicles may be life-changing for a victim and their loved ones. Anyone put in this position by an automaker that prioritized profits over protection deserves recourse.

Since 1969, The Gilbert Law Group® has been taking on negligent automakers, including some of the biggest companies in the country. While these cases can be complex, we have the resources and dedication to see each claim we take through to its resolution. If you or a loved one have been injured in a conversion van accident, reach out to our team to learn if you may be eligible to file an auto defect case.