When Passenger Restraint Systems Fail, Our Team Can Help. We Serve Clients Nationwide.

Despite having ample headroom, the driver of this vehicle was rendered quadriplegic when her shoulder belt failed to properly lock and allowed her head to strike the windshield header during a rollover.

When it works properly, the seatbelt is indisputably the most important safety device in an automobile. A seatbelt that works poorly or fails completely can cause serious injury and even death.

If you or a loved one was injured in a car accident due to the failure or defect of a seatbelt, you may be able to seek compensation. You should not have to face the serious consequences of an accident on your own when a defective automaker was to blame.

If you have reason to believe that your injury was caused by seatbelt failure, turn to the knowledgeable auto product liability lawyers at The Gilbert Law Group. For over 50 years, our firm has been fighting for injury victims across the nation. We know how to build a solid case and can handle the complexities of claims that involve defective auto parts. With one of the top auto defect legislators in the country and an in-house engineering team on your side, you can be confident your claim is in good hands.

The Gilbert Law Group® provides free and confidential consultations to those who were injured due to defective auto parts. Call our team at (888) 711-5947 no matter where you are in the nation.

When to Suspect a Seatbelt Failure

Seatbelt performance and effectiveness are dependent upon the facts of your accident. While it is therefore difficult to make generalizations, the following circumstances might warrant a consultation with a seatbelt failure attorney:

Evidence that a seatbelt failed because of design or manufacturing defects is often subtle and can be difficult to detect. If a belt failure is suspected, the most important thing to do is preserve the vehicle and its seatbelt system. Physical evidence can be essential to proving these claims.

The Purpose of Seatbelts in Auto Accidents

Most of the damage in an auto accident is not caused by the impact between the vehicle and another object, but by the occupants’ collision with the interior of the vehicle or ejection from it. This two-collision model helps us explain the power of seatbelts to keep drivers and passengers safe.

A properly functioning seatbelt can mitigate or even prevent an occupant from experiencing the second collision. When restrained by a shoulder and lap belt, a person will stay in place within the vehicle and can ride down the crash rather than being thrust into surfaces such as the windshield, steering column, or vehicle roof.

Of course, a seatbelt’s effectiveness relies on other parts of a vehicle being collision safe as well. Sadly, many automakers do not put enough time into ensuring passenger restraint systems function as necessary, resulting in serious injuries or death to vehicle occupants.

In an interview with Ward Lucas of Denver’s 9News, Jim Gilbert shared his opinion on the issues in the investigation into race legend Dale Earnhardt’s tragic death. As a racing enthusiast and auto product liability attorney deeply involved in accident investigation, he believes a full-faced helmet could have prevented the fatal injuries caused by the failure of a safety harness.

Earnhardt’s son was in a similar accident a week after his father’s and survived because his belt did not fail. Jim discounted a report by an investigator appointed by a Florida court that these safety features did not contribute to Earnhardt’s fatal injuries. 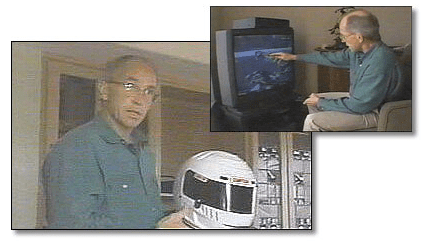 “What does the public take away from this? That seat belts don’t make a difference? They do, they make a tremendous difference.” -Jim Gilbert.

When an occupant is killed or seriously injured in a car accident despite wearing his or her seat belt it is reasonable to ask why.

Seat belts are not meant to completely prevent all injury. However, they can do a lot to keep passengers safe in accidents—and defects to them are linked to serious and preventable injuries. Both poor design and faulty manufacturing can threaten a seatbelt’s performance. Here are 8 of the most common defects that result in passenger injury.

Seat belt latch failure essentially removes any benefits of being belted in during an accident. Occupants whose belts fail in this way are found unbelted and often ejected.

The first type of latch failure, inertial unlatching, happens when a once-secured seatbelt is loosened during the collision. The auto industry denies this phenomenon ever occurs, but crash testing contradicts their claim. In some cases, accident level forces may depress the seatbelt release button, freeing the latch plate. This defect exists in millions of vehicles.

False latching, on the other hand, occurs when a seatbelt appears closed and secure when it is not. An occupant may see, hear, and feel the latch without it actually engaging. Even small amounts of force can cause the latch plate to slide free of the buckle.

Inertial unlatching or false latching may be at blame when an occupant or other passengers swear someone found un-belted was buckled in at the time of the accident.

The seatbelt of the below vehicle ripped in half during a frontal collision. The occupant was rendered quadriplegic when she struck the steering column.

Anyone who has handled a seatbelt can feel the webbing is strong. In fact, by design, seatbelts should not rip or tear under any force that may be present in a survivable accident. Any damage to the actual belt is likely a sign the manufacturer used improper material or experienced weaving deficiencies.

Seatbelts can also be severed by other auto components that deform in an accident. While this may not be a seatbelt failure per se, it is likely a defect. Ask our attorneys if damage to your seatbelt that occurred during an accident could give you cause to file a claim.

This seat belt was severed during a frontal collision when it came into contact with a sharp edge exposed on a front seat that deformed during the accident. The driver was left quadriplegic and brain-damaged when he impacted the steering column.

If you have ever tried to yank at your seatbelt too quickly, you’ve felt the retractor kick in, holding the belt in place. The forces of an accident should similarly trigger the reactor so occupants are held in place. When a retractor fails during a collision, a seat occupant may be thrown into other surfaces. Even a few inches of slack in a seatbelt can cause catastrophic or fatal injuries in accidents where those involved should have been able to walk away with few injuries.

As with seatbelt webbing, retractors can fail if they are designed or manufactured poorly. A common type of failure known as skip-lock (or skipping) happens when the retractor lock bar fails to fully engage the ratchets that control seatbelt pay out. If the bar only contacts the tip of each ratchet tooth, it will not be able to lock the belt in place. A close inspection of these teeth after an accident might reveal forensic evidence of skipping in the form of scrapes or small gouges on their tips.

This phenomenon has been demonstrated in testing and even documented in internal literature by General Motors. 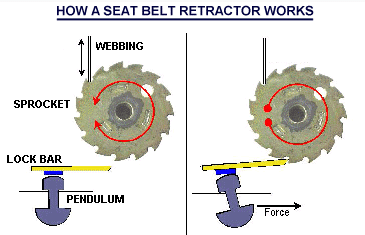 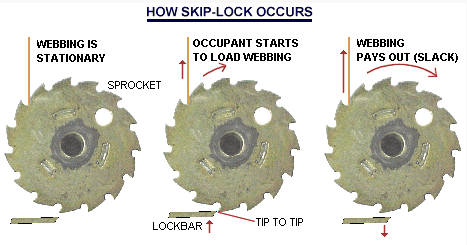 Use of Window Shade Devices

For passenger safety, auto manufacturers introduced a feature into seatbelts that allowed occupants to knowingly introduce slack into their shoulder belts. This window shade device was so named because it worked similarly to the familiar household apparatus, allowing the belt to be freely pulled and then locking it into its new position. It was included in most cars manufactured between the late 1970s and late 1980s.

Excessive seatbelt slack, as we have stated, can be the cause of severe injuries in car accidents. Window shade devices not only allowed occupants to make the choice to add slack but also loosened a seatbelt when someone leaned forward, to adjust the radio or reach for an item beyond arm’s length. Without proper tautness, a seatbelt is unable to restrain occupants from colliding with windows, the steering column/dashboard, or other interior surfaces.

When seatbelt anchors are located on the vehicle floor rather than on the occupant’s seat, the low angle of the belt can result in a passenger coming into contact with the roof during a rollover. A poorly placed D-ring can have a similar impact. Though adjustable D-rings have become more popular, many vehicles still have subpar seatbelt geometry. 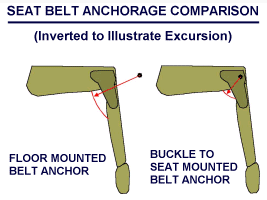 Door-mounted seatbelts become ineffective the moment a door opens during a crash. An occupant can be ejected or otherwise tossed around despite being properly belted in. This increases the risk of head and spinal injuries.

As for automatic seatbelts, what may seem like a clever way to get Americans to stay buckled in often backfires. Occupants may forget to put on the (manual) lap belt; while a shoulder belt can help some, both parts elements are necessary for the most effective restraint system.

Likewise, cars that do not offer shoulder belts to rear-seat passengers put these people in danger. This was standard in U.S. vehicles until the late 1980s, despite widespread industry knowledge that lap belts alone are nowhere near as effective when not combined with shoulder belts. The sad truth is, severe injuries suffered by those who only had a lap belt were probably preventable.

Failure of Other Vehicle Systems

The restraint system is only as effective as it is allowed to be within the larger context of the car. For example, extreme structural defects and roof collapse can result in serious injury even when a seatbelt holds an occupant in place properly. In vehicles with defective seatbelts, additional failures (like excessive roof crush) can exacerbate the injuries. Our attorneys can investigate your case to determine whether multiple auto defects were implicated in your or a loved one’s injury.

Call our firm for a free consultation with a seatbelt failure attorney at (888) 711-5947. We serve clients across the U.S.

The Gilbert Law Group® is well-versed in seatbelt and other auto defect claims. Founding Attorney Jim Gilbert is a member of the invite-only Inner Circle of Advocates, a group of 100 of the nation’s best plaintiff’s attorneys. He has also won multiple “Lawyer of the Year” awards from U.S. News—Best Lawyers® for his work in auto product liability. Both of these recognitions have elevated him to national prominence for the work he does.

However, we understand awards don’t help clients—verdicts and settlements do. We are proud to have recovered over $1 billion for injury victims. Our team has taken on international automakers in court, and we are not afraid to do so again. Between our skill in litigating and the support of our in-house engineering team, we have the ability to clearly demonstrate auto defects to a jury and show how they contributed to serious injury.