According to MedPage Today, the number of children going to emergency rooms after playing with magnets went up over five-fold between 2002 to 2011. Researchers of a recent study say that this is much higher than what was previously estimated. The study looked at close to 900 magnet-related injuries involving adolescents and kids under the age of 21. From 2010 to 2011 alone, magnet ingestions incidents went up to 3.06 cases per 100/year.) These findings line up with about 22,581 cases through the US that were reported on in the Annals Of Emergency Medicine. 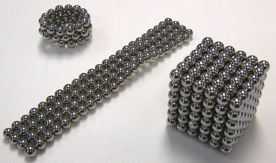 In 74% of incidents studied, the kids involved swallowed the magnets. While no deaths were included in the data, two incidents did involve perforated bowels and there were six patients who underwent emergency surgeries.

The study’s authors say the growth in the number of magnet injuries is likely due the increase in the number of forceful magnets found around the home in recent years. Such high-powered magnets can be eight times stronger than the magnets found in kids’ toys. Meantime, the Consumer Product Safety Commission is in the process of drafting a safety standard for magnets, which could likely ban high-powered, small magnet sets.

Magnet Sets
These products, which usually group together high-powered, small magnets that can be easily separated into their individual magnetic parts, have only been around since 2008. However, in the years following that, there have been at least 1,700 magnet ingestion injuries that required emergency room care.

The swallowing of any small object—especially a magnetic one—can up the risk of a choking incident. A single tiny magnet, when ingested, can get stuck in the lungs, throat, or esophagus.

Swallow two or more small magnets, and it can become even more complicated—especially if the magnets are drawn to each other in the body. This may cause serious damage to the intestines and stomach, including sepsis and pediatric bowel perforation.

Magnet desk toys, usually intended for adults, have been commonly involved in magnet injury accidents involving kids. Young children may think the adult toys are for them and play with the small pieces, pulling them apart and putting them in the mouth. Very young kids can mistake the small magnets for candy. Meantime, older kids have been known to play around with the small magnets, pretending they are piercings. Last year, several magnet desk toy makers agreed to stop making their products after the CPSC sued them.

Also in 2012, an Oregon toddler had to undergo surgery after she swallowed 37 Buckyball earth magnets. (Buckyball magnet products are among the ones that are no longer being made.)

Often, it can be hard to tell when a child has swallowed a magnet. Symptoms may not appear for a couple of days and even then he/she may only display flu-like symptoms. However, if the magnets aren’t removed from the body soon, serious injuries or death can happen.

Contact our products liability law firm today. The Gilbert Law Group® represents the families of children injured or killed because of a defective or dangerous product. One of our child injury lawyers would be happy to discuss your legal options with you. You may have reason to pursue a magnet product injury case.