The US Consumer Product Safety Commission is urging consumers to make sure that young kids stop using certain Fred & Friends pacifiers that may pose a choking hazard. This week, both the company and the federal agency recalled 200,000 pacifiers. 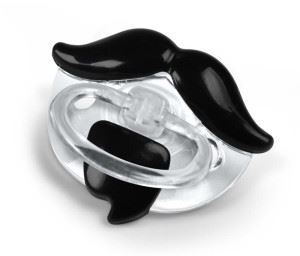 So far there are no reports of injuries, just one report on the volume knob on one of the pacifiers coming off. The manufacturer is offering a refund for the recalled products.

Earlier this month, Playtex put out a voluntary recall of its Playtex Pacifier Holder Clip, involving 1.4 million pacifier holders distributed in Canada and in the US. The product is a plastic clip with a ribbon and pacifier plastic ring at the end. The manufacturer says that because the holder clip can crack, part of it may break off, potentially posing a choking hazard.

Seeing as pacifiers are placed in the mouth, it needs to be big enough with its parts secured so it doesn’t pose a choking hazard to children. Last year, Kids in Danger wrote about a recent SaferProducts.gov product injury report involving 32 pacifier-related reports. (That site is the consumer incident database of the CPSC.) Among the reports were incidents involving infants breaking their pacifiers and small pacifier pieces causing choking or laceration injuries. Bleeding and bruising to the gums or teeth caused by pacifier pieces also were noted.

There have also been reports of babies choking on pacifiers that they tried to put in their mouth sideways—when this happens the pacifier can flip (or break) while inside. A detached pacifier nipple may also pose choking and ingestion hazard risk.

One child had to undergo a partial bowel removal procedure to get the pacifier out. Choking has also happened when the pacifier has gotten stuck in the back of the throat. The average age of babies mentioned in the report was 8 months, although infants between three months and 3 months were included.

When a child is choking, this usually involves an object getting stuck in the trachea. This prevents air from entering the lungs, making it impossible for the child to breathe properly. If a child is unable to breathe for long this can lead to serious injuries, including brain damage and death.

At The Gilbert Law Group®, choking injury lawyers represent the families children who were injured or killed because they were involved in a choking accident involving some product. Contact our child injury law firm today.