Lead poisoning is the number one children’s environmental health hazard, according to the U.S. Centers for Disease Control (CDC). Children can be exposed to lead in numerous everyday situations, and lead poisoning in children is a serious problem in the country and around the world. Your child can be a victim of lead poisoning, and you may not even know it.

Lead is a toxic element that can make people, especially children, extremely ill, and it can be found in numerous places. Lead does not biodegrade, and it will never leave your body after you ingest it. It is simply one of the worst environmental hazards on earth.

Initial consultations are no charge.

The federal government has tried to eradicate lead from our lives over many years, but, as recent headlines about toys from China point out, that isn’t so easy. It was banned as an ingredient in household paint in 1978, but it still exists on walls from houses of that time and before, and the landlords and owners of these homes still may be liable for any toxic effects on their tenants.

Unfortunately, it is very easy for a child to come into contact with dangerous levels of this poison. Despite the efforts of the government, lead can still be found almost everywhere—on the walls of old houses, in toys, in batteries, in pipes, in ammunition, in some pottery glazes, in some inks, in other kinds of paints used for boats, industrial buildings and machines, and for military uses. Lead was even found recently in artificial field turf. 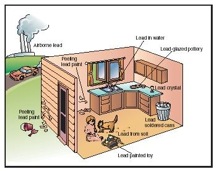 The United State Environmental Protection Agency lists even more lead sources, including ground water, soil, the areas around old smelting facilities, in household dust, in certain jobs, in some foods and potable liquids, in hobbies like pottery and painting, and in “home remedies” such as “greta” and “azarcon,” that are used to treat an upset stomach. In other words, you or your child can easily be exposed to lead poisoning and not even know it.

The Centers for Disease Control recommends lead testing for anyone who may be exposed to lead paint in old houses. Given the many other places where you could come in contact with lead, it may be wise to consider testing if you or your children have any of the symptoms we’ve listed and you think you may have been exposed.

What are your legal remedies if you or your child has lead poisoning? Depending on the facts of your situation, you may be entitled to damages from manufacturers, property owners, or other parties.

As a law firm, we have considerable experience in working with families who have the misfortune of being made sick by exposure to poisonous levels of lead.

Contact our office at (888) 711-5947 and discuss your injuries in a FREE consultation. We take cases nationwide.